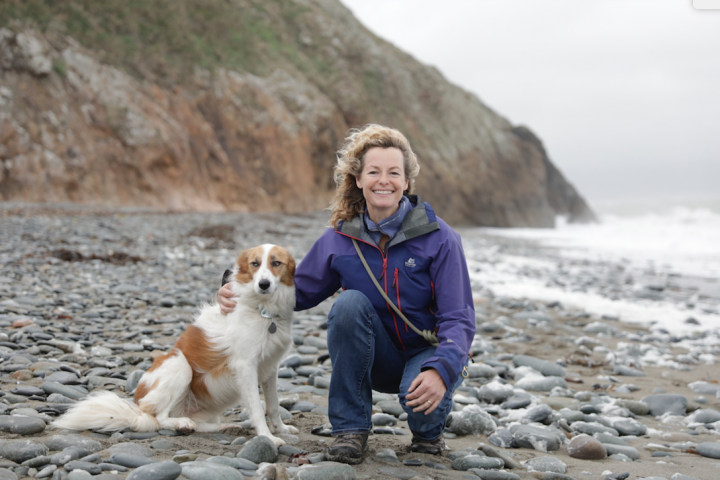 Kate Humble: Off the beaten track  follows Kate and her Welsh Sheepdog, Teg, on their explorations of the Welsh countryside;  seeking to understand how the rugged, rural, landscapes of Wales are being shaped and how they are shaping the people who live, work and play on it.

In this second series, they travel even deeper into the remote areas, connecting with more colourful characters, whose lives are driven by their passion for the environment around them. By immersing themselves into their worlds Kate and Teg draw attention to our individual influences, in forming the fundamentals of Welsh life.

Split across four regions, this time, their journey covers a larger ground, from North, to Mid, then venturing South and finally exploring the West reaches of Wales.

Kate and Teg take the audience on a journey to rediscover and celebrate the areas often forgotten or overlooked, through surprising and revelatory stories.

Up north, Kate reaches for the sky, as she attempts to climb the tallest man-made structure in Wales, the ArfonTower. Next she learns how to overcome natural obstacles with the novel of Pack Rafting. On the North-east coast she meets the dogs trained to carry out wildlife conservation and on the north-west coast, she digs a grave and experiences a moving funeral at the only Woodland Natural Burial Ground in the area.

In mid-Wales, they have a taste of Stone Age life, mucking in with a farmer and an archaeologist who are building an ancient settlement. Kate and Teg explore the potential death traps of our historical legacies at an old led mine, where the South and Mid Wales Cave Rescue Team practice their skills, using Teg as a victim. They learn about the plight of Welsh mountain Ponies, whose numbers are down to the hundreds; and Kate discovers her legs are built for walking, when trying Mountain Biking in the Brecon beacons National Park.

In South-Wales, Kate and Teg join a fire crew, fighting wildfires with controlled burns. By contrast they learn how to make large land art pieces, helping to create a 30ft mandala. Teg gets a run for her money, when meeting film actors at a rural Animal Film Academy and Kate fulfils her childhood dream, learning how to shoe a horse.

The final episode takes them around West-Wales. In Newport Pembs, Kate helps with the harvesting of water reeds, a thick grass-like plant now used in 80% of thatched roofs in the UK. In MerthryMawr, she learns that protected historical buildings are thatched with heritage wheat straw, for a classic ‘poured on custard’ effect. On the beach of PendineKate joins a group on horseback, traversing the countryside to hunt humans. Up in the mountains, she discovers why the Scottish Highland Cattle are taking such good care of the Welsh land, and finally Kate and Teg visit a special college for neuro-diverse youngsters helping students thrive through a deep connection with the land.

Designed for a family audience, the Programme aims to inspire the viewers to go out and explore the Welsh countryside with fresh eyes; to surprise and delight the audience by revealing that there are still hidden corners to be experienced; and to help us appreciate the substance of Welsh nature and every person’s footmark on it.


Watch Off the Beaten Track on iPlayer

This website uses cookies to improve your experience while you navigate through the website. Out of these, the cookies that are categorized as necessary are stored on your browser as they are essential for the working of basic functionalities of the website. We also use third-party cookies that help us analyze and understand how you use this website. These cookies will be stored in your browser only with your consent. You also have the option to opt-out of these cookies. But opting out of some of these cookies may affect your browsing experience.
Necessary Always Enabled
Necessary cookies are absolutely essential for the website to function properly. These cookies ensure basic functionalities and security features of the website, anonymously.
Analytics
Analytical cookies are used to understand how visitors interact with the website. These cookies help provide information on metrics the number of visitors, bounce rate, traffic source, etc.
Save & Accept